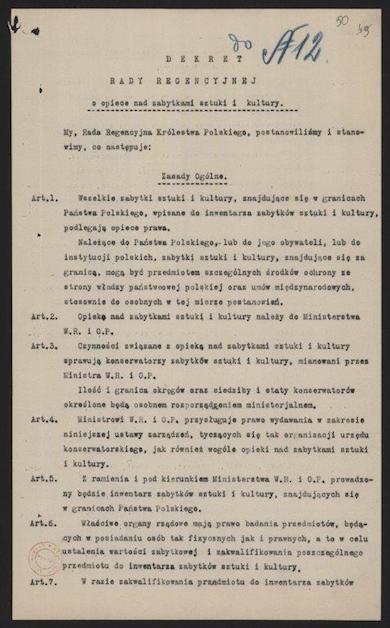 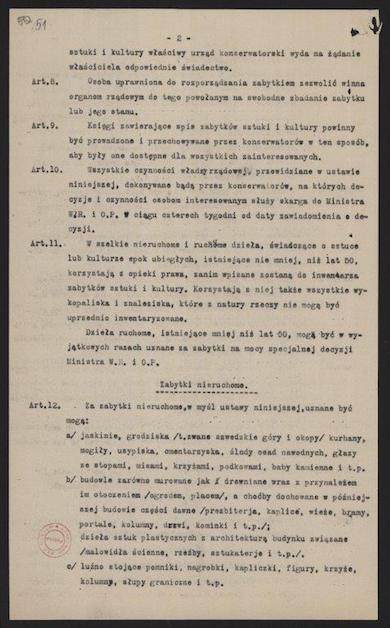 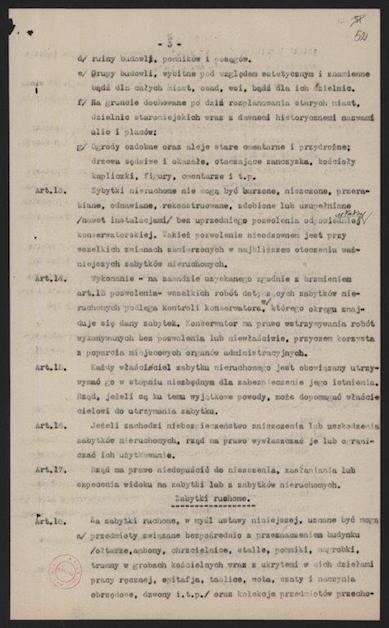 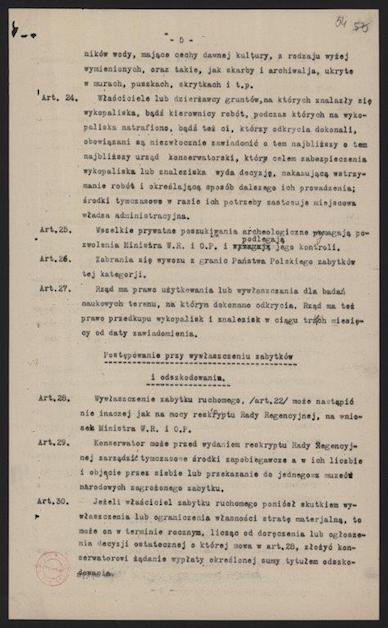 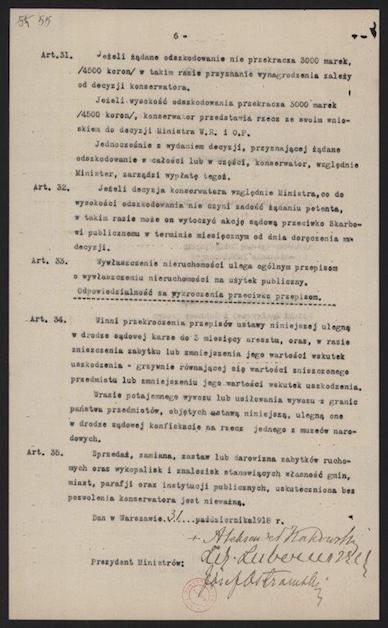 At the beginning of the rebirth of the Polish state after 123 years of partitions, the Regency Council of the Kingdom of Poland together with the government operating in Warsaw were confronted with many social, economic and political problems that needed immediate resolution. The young state was still facing a military danger and had to prepare for potential aggression on the part of its neighbours, especially Soviet Russia. During these uncertain times, the Regency Council recognised that one of the most important elements of the reconstruction of the Polish state, culture and national identity would be to take care of national monuments. It was all the more important as the Polish cultural heritage, devastated by invaders and destroyed during the First World War, had not been protected in a systematic manner (there were only initiatives of individual conservators or institutions such as the Society for the Protection of Historical Monuments).

The decree of the Regency Council of 31st October 1918 on the protection of monuments of art and culture is the first legal act in the history of the Polish state which introduces and regulates a comprehensive system of monument protection in Poland. It was the basis for establishing a conservation service which organised the first general inventory of monuments and the first institutionalised public administration institution working for the protection of monuments on the territory of the independent state. In the text of the decree the term “Polish state” was used, which was uncommon for legal acts from that period.

The provisions of the decree contained the first definition of a monument in the history of Polish legislation, introduced legal forms and instruments for the protection of monuments, regulated the issues of exporting them abroad, as well as expropriation of real estate monuments and protection under criminal law. The proposed legal solutions were the basis for further work in the field of improving the protection of cultural heritage and the foundations of a separate branch of law devoted to this subject. The epoch-making significance of legislative solutions adopted in the decree is evidenced by the fact that some of them, in a slightly modified form, function in the currently binding Act on Monument Protection and Preservation.

The history of the decree is connected with the history of the entire archive resources of the Regency Council. The document was originally kept in the collection of the Civil Cabinet, and in 1930, along with the Council’s archives, was included in the collection of the New Records Archive, where it resides today. The resources of this institution were greatly damaged during the Second World War, but the original copy of the decree – bearing the handwritten signatures of the members of the Regency Council: Archbishop Aleksander Kakowski, Duke Zdzisław Lubomirski and Count Józef Ostrowski – survived. A draft of the act, together with justification and comments to selected provisions, has also been preserved.

A scanned copy of the document is available on www.szukajwarchiwach.pl.