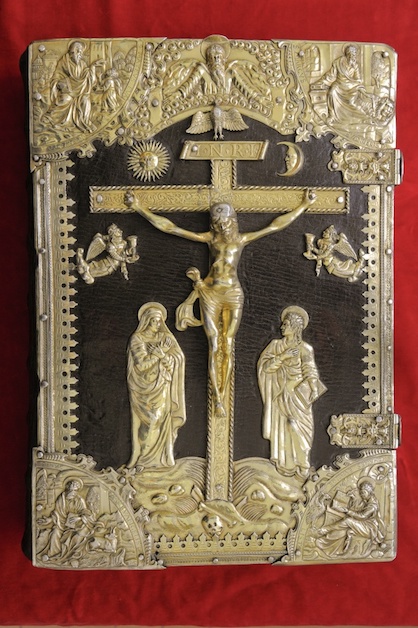 In all likelihood, the Codex Aureus, or Golden Evangelion of Gniezno, was created in the late eleventh century and was used right up until the nineteenth century in the liturgy of the Mass celebrated by the archbishops of Gniezno, who have also held the title and rank of Primate of Poland since the fifteenth century. It was last used to bless the faithful by Pope John Paul II in Gniezno in 1997 and Bydgoszcz in 1999. The codex belongs to that exceptional group of books which were created with enormous care, making use of noble metals. Four codices bearing the hallmark of one particular scriptorium have survived to this day and the Golden Evangelion of Gniezno numbers amongst them. The binding dates from the Renaissance and was made using boards covered with brown leather, on to which gilded silver plaques were applied. The front cover presents the Crucifixion, with the Most Blesséd Virgin Mary and St. John standing at the foot of the Cross. The codex was most probably rebound in the seventeenth century, when the block was trimmed and silver elements were unskilfully laid on to the cover. In 1979, in preparation for photos to be taken for publication, it was unbound and dismantled. While that work was in progress, a bookbinder’s sheet which belonged to a different Evangelion and is thought to have made its way into the Codex Aureus in the seventeenth century, was removed from it.

There are various hypotheses regarding the origins of the Golden Evangelion of Gniezno. As far as the place where it was created is concerned, the signs point to Regensburg in Bavaria or Prague, in what was then Bohemia. It may have been given to Gniezno Cathedral by Bolesław II the Bold on the occasion of his coronation as king of Poland, which took place in Gniezno in 1076. Another hypothesis suggests that it might have been the gift of Judyt, wife to Duke Władysław Herman, who went to Gniezno somewhat later. It is currently held in the Archdiocesan Archive of Gniezno.